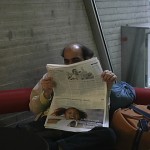 Waiting for an Identity

He smokes a pipe and compulsively runs an electric razor over his visibly smooth face. He eats in fast-food restaurants on a daily basis, washes in public restrooms, and lives off the generosity of strangers. He receives a lot of mail -- close to one hundred pieces regularly -- and he keeps almost all of it. He has been the subject of a couple of feature films, a few documentaries, countless newspaper articles, and several scholarly essays. He was a student of mathematics who is now a fixated scribbler. He quotes Erich Fromm, and although he has no love life, he would definitely like one. When asked if he has a desire for something, he laconically responds: "Probably."

His name is Mehran Karimi Nasseri and he has been living in Charles de Gaulle Airport for the past thirteen years. The press has dubbed him "The Strangest Case in Immigration History", and he definitely is. Nasseri only calls himself "Sir Alfred". Make the mistake of calling him Mehran, and you will probably get: "No, no, Sir Alfred please." He chose the name "Sir Alfred", because, well: "It sounded nice." It definitely does.

A film about Sir Alfred by Hamid Rahmanian and Melissa Hibbard screened during last week's Arab and Iranian Film Festival at Cantor Film Center in New York. It is a terse, surprisingly economical treatment of their subject. In it, they quickly reiterate the story that introduces Sir Alfred to innumerable audiences: an expulsion from his native Iran in 1977, official refugee status and itinerant years in Europe, and then in 1988, an arrest at Charles De Gaulle Airport for missing papers. Then detention, and yet more detention. Eventually his case was picked up by French human-rights lawyer Christian Bourget, and Sir Alfred was released. Soon thereafter, to be brief, Sir Alfred was a free man. Then comes the strange part: he didn't leave the airport, and he's been there ever since.

If you read some of the recent press on Sir Alfred the reason for his staying at the airport is clear: the authorities in Belgium listed Sir Alfred as Iranian. He's not, he's now English. (More on that later.) However, things are more complicated if you listen to Sir Alfred. Usually, the reasons for his predicament involve not having the right papers. Or the right name. Or the right nationality. In fact, the lawyers, governments, and NGOs that have rallied to his cause most often -- from Alfred's point of view -- can't get a damn thing right. He's waiting for this paper, or waiting for that response. He's writing a letter. Everybody is getting back to him. Everybody is fucking up.

Meanwhile, his lawyers and supporters say -- while exasperatedly throwing their hands in the air -- that Sir Alfred is just nuts. They just don't get him. He is a prisoner who can't adjust to the world, and wants to stay locked up. He is a free man -- he could just walk out the door. They hope he'll get better soon, but there's nothing they can do for him anymore.

"Sir Alfred" is a fantastically frustrating film about a fantastically frustrating subject. It seems -- from the amateur's point of view that is -- that Sir Alfred is a compulsive, habitual, non-stop liar. He first claims to be English. Then he claims to be Swedish. In the past he's claimed that he is Danish, and for a while, even Finnish. He is certainly not Iranian. He is definitely not Mehran Karimi Nasseri. A good portion of the video is occupied by Sir Alfred adeptly backpedaling his way out of one whopper, only to land himself in another. His stories never seem to add up. He almost never cracks a smile during all of this -- leading you to believe that maybe Sir Alfred really does believe what he is saying. Or maybe he just has gotten the routine down pat.

Rahmanian and Hibbard have a hard time with Alfred, but not because of his unbelievable stories. It seems that Sir Alfred is maturing into a media primadonna of sorts: when the filmmakers return for a second day of interviews, Sir Alfred is fed up. We agreed to only one day, he protests. No, we thought there would be more, the filmmakers insist. Sir Alfred says he is busy (writing again), and he has given too much time to the video already. The scene is embarrassing, and Rahmanian and Hibbard are confused and flabbergasted. Eventually things cool down, and everyone gets back to business.

From the very first day, both Rahmanian and Hibbard learn that speaking in Farsi to Alfred is a downright show-stopper. It seems that Sir Alfred does not want to speak to Mr. Rahmanian, who is also Iranian. Make no mistake, the silence is due to the filmmaker's nationality. Only Rahmanian's American wife can do the talking, and in English. Again, the filmmakers adjust, and as long as Rahmanian keeps to himself, the interview goes well.

Rahmanian makes up for his almost total absence in the interviews with his presence in the movie's narration. His occasional commentaries try to make at least some political sense out of the estranged refugee. His explanation goes something like this: Sir Alfred, you understand, is ashamed to be Iranian. All Iranian refugees, on some level, share this guilt. Sir Alfred wants to be someone else. Case closed. Mr. Rahmanian tries his best, but his explanations seem far too easy. Sir Alfred is, by far, not your typical refugee. He is probably not your typical anything for that matter, and no typical explanation will do. Maybe no explanation will do at all.

Ex-prisoner. Self-hating Iranian. Celebrity squatter. Conceptual artist. Victimized refugee. Poststructural superhero. Slick-talking grifter. Professional lunatic. Somehow none of these labels fully suit Sir Alfred. They end up saying more about the person pigeonholing him than they say about the man himself. At the same time, there probably is a bit of truth to all of them: Yes, he is a little funny about all things Iranian. Yes, he is perhaps launching a critique of national legalist identity. Yes, he is charming, often a little glib, and a huge showboat. No, there is no reason to believe he is Swedish. Sure, he does not want to gamble with the world outside. In short, with Sir Alfred, everyone has an opportunity to be right: Iranian refugees, immigration officials, poststructuralists, documentary filmmakers, airport security men, lawyers. Everyone gets a shot at explaining his predicament, and no one is going to be turned away.

Sir Alfred's politics -- if he does have any -- are personal. He hasn't confined himself to Charles de Gaulle airport in the name of refugees everywhere. No one is seriously holding him up as a poster-boy for anything. He seems to be a highly dignified, strong-headed, albeit slightly worn and ruined loner. Through all of the media frenzy, Sir Alfred's actions and statements have made one point incredibly clear: if you are looking to project your issues onto me, forget it -- my struggle is for myself only, it is as complex as I am. Then, Sir Alfred might add (politely of course): buzz off.

No one seems to admit that over the years Sir Alfred could have found a certain amount of true, unclouded contentment in the airport's regular schedules, stabile atmosphere, and institutional order. Maybe it's best to think of Alfred as a somewhat happy man sitting on his red bench in the corner of Charles de Gaulle airport, writing his diary, smoking his pipe, and waiting for an identity that may never arrive.