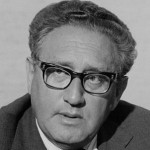 The Trials of Henry Kissinger

Film review of "The Trials of Henry Kissinger" by Alex Gibney and Eugene Jarecki.

While pushing his new novel "Nuremberg: The Reckoning" recently on National Public Radio, William F. Buckley Jr. was attempting to clarify why an International Criminal Court (ICC) would not be such a great idea. The unflinching ultra-con explained that an ICC would succumb to "opportunism" and therefore would fall short of any purported objectivity. The point is hardly original -- it has been vociferously argued for some time now by Henry Kissinger, who, as Buckley explained, is having a hard time "travel[ing] abroad because somebody will bring a war crimes trial to him." Buckley was of course omitting the embarrassing details: at present Kissinger is wanted in Argentina, Chile, Spain, France, and Belgium, with other countries possibly following suit. When pressed to answer whether or not the leaders of the Taliban should be brought in front of such a court, William, a bit befuddled by this point, cleared his throat and assured his listeners that he is "always eager to have criminals punished."

Alex Gibney and Eugene Jarecki, the makers of "The Trials of Henry Kissinger" are eager to see that done as well. They however, have no interest in supporting the US's double standards on the matter. Their film was screened recently at Human Right Watch's 2002 International Film Festival at Walter Reade Theater, and its eighty minutes are a tersely argued, densely packed plea for the arrest and trial of the roguish US elder statesman. It is based on Christopher Hitchen's book of an almost identical title, and relies heavily on the book's research into Kissinger's actions in Indochina, East Timor, Cyprus, Chile and Bangladesh. The film practically uses Hitchen's book as a shooting script -- much of the source material and argumentation are identical to what is to be found in the book. In fact, it seems as if the filmmakers simply started with the first page and stopped when they reached eighty minutes, or ran out of money. The latter important pages on Cyprus, Kissinger Associates and international law are left out entirely, and the omissions are to the film's slight detriment.

There is also much new material to supplement Hitchens' lean political biography. The filmmakers have added a number of interviews, many of them with Kissinger allies such as Alexander Haig and William Safire. Haig's nonsensical diatribes and apologies provide reliable, if not uncomfortable, comic relief. For instance, according to Haig kidnapping isn't a crime if the motive is acceptable. Kissinger too was asked if he would answer a few questions, and to no one's surprise, he declined.

By now, it's well established that Kissinger is a liar. He is a politician of the most ruthless cunning. He is a statesman who enjoys playing celebrity. He is a professional kiss-ass. However, is he a war criminal? Is the former Secretary of State solely guilty in all this devastation? The filmmakers answer resoundingly 'yes' to the first question, but are a bit vague on the latter. What are the limits of culpability? What of the other politicians who carried out or continued his pollicies? The Carter and Reagan administrations did more damage in East Timor than Ford had time to do. So then, Vance? Shultz? Haig? Reagan and Carter themselves? Where does one stop? This kind of questioning is frequently used by Rightists to halt the discussion on US war crimes, but it is also probably the best way to get the debate started in earnest.

When focusing on Kissinger solely, as Gibney and Jarecki do, there is a mountain of evidence showing how routinely he defied national and international law in the name of anti-Communism. A smarter statesman may have put more buffers between himself and his hired thugs, but the monomaniac Kissinger wanted direct control over many of the mafia-style hits he placed on such inconveniences as General René Schneider of Chile. Another statesman may have acted differently, or at least in a more circumspect manner. Along with Nixon, Kissinger planned, managed and covered-up the expansion of the Vietnam War into Cambodia. He armed Chilean and Latin American hoodlums in order to undermine South America's most robust democracy. When asked personally and directly by Suharto what the US would think of an invasion of East Timor, Kissinger and his boss declared that they would be nothing but helpful.

Kissinger's despicable past comes back to haunt him often, and when activists drag out the dirty details in public, the former diplomat isn't a very brave nor impressive fighter. He's canceled talks several times after hearing that Christopher Hitchens might be present. Kissinger is inevitably thrown into spasms of belittlement, evasion and denial when confronted in public by East Timor Action Network activists and their allies Amy Goodman and Allan Nairn. On one occasion when responding to Nairn about Timor, Kissinger could only ask why activists like him are so obsessed with such a tiny, obscure country. Needless to say, his desperate deprecation of the island didn't help his defense. Extreme and rash argumentation seems to be his most common way of responding to the allegations against him. For example, when asked about Christopher Hitchens' book on television, Kissinger claimed the author was a Holocaust denier. He's not, so Hitchens sued Henry, and Henry was forced to apologized. Such behavior is becoming more typical of Kissinger, and "Trials" gives several embarrassing, if not entertaining, examples of such rash obfuscation and vilification.

The movement to get Kissinger has often been derided as too narrowly focused, too emphatic on attacking a very visible and easily despised rogue celebrity, and perhaps this is true. Similar cases are being made against Sharon, Arafat, Hussein and others, but you wouldn't know it from the film. It's due time to draw connections between these cases, to understand how they interrelate, mutually support, or perhaps even undermine each other. It would be a disservice to the families of the victims of historically beleaguered countries like East Timor if the key players of US administrations are ignored because their statesmen lack the spectacular profiles cut by someone like Kissinger. In a discussion after the film, Gibney stressed that the documentary would be a failure if it seemed to assert that the only problem with US foreign policy was Kissinger. His film is far from a failure, but perhaps it doesn't work hard enough to overcome the fixation that can easily set in when writing about a character like Kissinger.

Oh, and back to that interview with Buckley. The opinion that Buckley was parroting is originally to be found in an article by Kissinger, "The Pitfalls of Universal Jurisdiction." Buckley failed to mention that Kissinger's thinly-veiled self-serving defense was recently responded to by another Nuremberg prosecutor and longtime peace activist, Benjamin B. Ferencz. The well-respected international law theorist argues that, at the very least, an international tribunal would protect against unilateral political witch-hunts, which Kissinger claims would be legion if the ICC ever sees the light of day. It will, and although Kissinger seems to be off the hook since the court can not prosecute cases retroactively, perhaps the work of those who are trying to indict him will make US statesmen think twice before they order genocidal attacks on civilians. In the words of Ferencz: "It is not the passion of its advocates that is moving nations toward the rule of law -- it is the passion of those who have been victims of politics as usual."