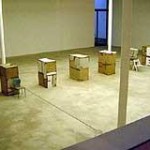 In his 1958 novel "The Happy Christian," Terry Southern's billionaire protagonist Guy Grand uses his fortune to make people sweat. For Grand there is nothing that people won't do for a mountain of money: pedestrians eat his traffic tickets, skywriters scrawl obscenities over cities and people fish hundred-dollar bills out of steaming filth. All are compensated generously, some with a cool million, and the wealthy prankster is often kind enough to remunerate his victims before the dirtiest portions of their challenges are complete. Grand is a decadent prankster, a one-trick character whose life is fixated only on watching money and people move.

In his own way, Santiago Sierra has been playing the poor man's Guy Grand for several years now. The Spanish-born artist, who now lives in Mexico, has been making "performances" by giving small amounts of cash to minorities and day laborers to perform some of the most pointless, humiliating and dangerous tasks. Falling walls are held up on the backs of Mexicans, Puerto Rican youths are tattooed with an ugly line across their backs, and immigrants are asked to sit in boxes for an entire day. Unlike Grand, however, Sierra's made none of his "performers" rich, and unlike Southern, he is neither a radical nor a wit. Many critics have characterized Sierra's message as deeply moralistic, but many more label him an unrepentant cynic. Poor people are his art supplies, the argument goes, and in the end the one who receives the greatest compensation is Sierra himself.

His new post-conceptual sweatshop at Deitch Projects, "Nine Forms of 100 x 100 x 600 Cm Each, Constructed to be Supported Perpendicular to a Wall," should be subtitled: "By Several Dozen Poorly Paid Minorities." In the installation a series of roughly constructed, cantilevered minimalist boxes are held up by several dozen workers. The press release for the show is Sierra's proposal for the piece, and in it he demands that: "The workers will always remain facing the wall and have to be Mexican or Central American." Perhaps you get the point by now. In any case, the workers in the gallery were neither exclusively from his two areas of preference, nor were all facing the wall. They were slightly bemused, somewhat pissed and eager to voice their opinions about the work, which were polite, but, as might be expected, negative. The workers were also very good at getting around their absurd job, and asked viewers to stand in their place to see what it was like. One pulled down his shirt to show me the bruised shoulder on which Sierra's large minimalist forms were supported. At that point, the white, thrift-store-clad gallery attendant came over and asked if everything was OK.

Sierra's work has not always been so ethically ugly. He's also had a good time being pointlessly aggressive, if not occasionally amusing, by blocking traffic in busy Mexican thoroughfares and fucking up the paint jobs of new cars. He made an old frat prank mildly middlebrow by disassembling a truck and reconstructing it in a gallery. He's tried to burn down a gallery -- unsuccessfully, it might be added. It's degraded Dada, not entirely de-politicized, but always removed from any larger social movements, which the artist seems to ignore with alarming regularity.

Once in a while, if not simply once, Sierra transcends his own offensiveness. For his project at PS1 two years ago, "Person Remunerated for a Period of 360 Consecutive Hours," he paid a guard at the museum (again a minority) to sit in isolation behind a walled-off portion of the gallery. The "intern" was allowed to bring anything he wanted into his new quasi-cage, and he was able to spend his somewhat free time playing video games, reading books, talking on his cell phone and watching the tube. The piece sparked the typical protests, derision and rolled eyes, but for once there was a new species of response: envy. Many, including this reviewer, felt as if a week alone with books, games and TV, away from everyday duties, might not be such a bad thing -- especially at an hourly rate. Perhaps Sierra was trying out some new political territory. However, given the fact that Sierra used not a lottery of volunteers, but a Latino security guard, you have to feel as if his typical program of slapping the disenfranchised in the face was again playing itself out.

What about the artist's "politics?" Dutiful critics remind us that Sierra is exposing something about capitalism: namely its brutality, its sadism. True, wage slavery partakes in its share of both, especially when a plentiful pool of immigrant labor is available, though that still says little about Sierra's own processes. Sierra's work is not symbolic, it is not simply about oppression, it is oppressive itself. Again, that hypothetical defender of Sierra may say that his work does this in order not to excuse itself from the cruelties of the labor market. But why recapitulate something in order to say it is wrong? Furthermore, why simply stop at saying it is wrong, something any moral midget can do, and instead not try to help transform those social relations?

Possibly the "critique" is enough for you; maybe you don't think artists should be burdened with some degree of constructive social engagement. Then again, you may simply cringe, curse under your breath and wonder why the artist has any career at all. His work's point is hopefully obvious to you: Art is involved in an economy based on an exploitative division of labor. That's Step One, and you may be disappointed to learn that for Sierra there's no Step Two. One day perhaps an enterprising critic will sit the pissed-off Santiago down, look him in his hardened, worldly eyes, and say with true sensitivity and severity: "Yes, Santiago, we know."

Maybe that will end it: the anal-aggressive gestures, the pointless reproductions of an exploitative economy, the priestly pontifications on social problems the artist himself seems unwilling to help change. More likely, however, Santiago will only up the ante, and in a few years we will have Bolivians mopping up toxic spills at Marian Goodman, or Vietnamese laborers sorting biohazard in the lobby of the Frankfurt Kunstverein. But we can always hope that Sierra will stop using political art as an alibi, and realize that working for political change might be a more productive, and more interesting, direction.