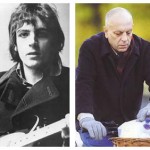 The Death of Syd Barrett

The death of Syd Barrett sent scrambled signals across the media, from which two channels could be tuned. The first concerned a rock-and-roll genius that succumbed to acid-assisted schizophrenia. The second was the post-recovery recluse, the Salinger of rock who lived in a quiet UK hamlet, tending his garden and living off the royalties of a truncated career. But a cryptic third channel also exists. It tells of a young man brutalized by mental decline and drug abuse, someone who, only a decade after his work with Pink Floyd, can be seen in an undated photo, not as the handsome rock star, but as a mental patient, grim and afraid.

I saw the images of Barrett on the BBC's Web site soon after his death. At the time (mid-July) I was occupied with writing a video essay on post-apocalyptic films, those kinds of movies featuring a character who wakes up to find that he or she is a city's sole survivor. The photographs of Barrett made perfect sense to me. They caught me at just the right moment. It seemed like they had everything to do with the video I was writing, he was like a character from one of these films. What exactly this meant was hard to explain. There was no easy, verbal connection between the photos of Barrett and the images from the films, but I might gamble that the connection has something to do with extremes. Like Garbo, Barrett lived most of his adult life in either absolute fame or absolute invisibility. He avoided the known, comfortable ground in between, preferring to live as the last man on earth.