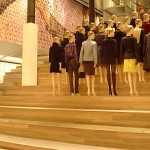 Architecture review of Projects for Prada Part 1 and the Prince Street Prada store by OMA/AMO and Rem Koolhaas.

If it isn't well understood it's at least generally experienced that shopping has become an end in itself. Once, probably fairly recently, if someone needed a pair of shoes, he or she went out and unceremoniously bought a pair. Shopping was perfunctory, utilitarian, transparent in its function. Over the past half-century, multinational capitalism -- or some Disneyfied version of it -- has turned shopping into a form of entertainment to be enjoyed free from all the fuss of having to actually buy something. Corporate bookstores encourage the public to sink into comfy chairs and read for hours on end; sneaker stores distract shoppers from their Adidas with a plethora of sports films; and ever-expanding shopping malls provide mall-goers with amusement parks through which they can leisurely stroll without ever buying a thing. Of course the thinly veiled hope behind all of this is that today's loitering non-customer might become tomorrow's dutiful consumer.

Rem Koolhaas' Prada is a store for the non-customer. It could never be anything else. If everyone who was present during the time I spent in the store actually bought something, New York's economy would probably see the greatest single transfer of wealth in its economic history. At any rate it would be an impossibility in the first place. Those non-customers trying to cram themselves into the high-tech sex-booths (called 'changing rooms' by the Prada staff) outnumber the shoes in the store on a twenty-to-one scale. Most of them probably make in a week what it takes to purchase a Prada-branded shoelace. No, this is not a store for the potential customer. It is a playground for the rest of us.

Koolhaas and OMA/AMO have put together a primer for their post-shopper jungle gym: Projects for Prada Part 1. The book is typical Koolhaas: entire forests were clear-cut for a brick-sized publication filled with lots of half-baked ideas, some unbaked ideas, some unbakable ideas, and of course, billions and billions of pictures. Yes that was 'Part 1' in the title -- it's been reported that OMA/AMO has twenty volumes of such material. Projects for Prada is the kind of beast that reviewers usually refer to as a 'tome,' not a 'book,' and in its infinite pages, King Rem tries his best to give a bit of political and economic context to Prada's endeavors. OMA/AMO's once-over-lightly analysis is a meager attempt to illustrate the international expansion of their client. The simple, pretty, multi-colored graphs and sentence-long Cliffs Notes explanations of international finance promise not to tax too heavily on the over-worked minds of aspiring young architects. Maybe one day soon Koolhaas will drop the affected inter-disciplinary intellectualism, and just go for an all-out lobotomized Warholian gloss. Which store is your favorite, Rem? LA? New York? Oh, I like them all...

The language of the book is unbeatable for its laconic one-word labeling of big, basic concepts. A picture of a library is labeled 'Library,' a clinic is labeled 'Clinic' and a showroom is appropriately entitled 'Showroom.' Maybe a sentence or two of further explanation follows. After two hundred pages of this you get a bit numb. There's also a lot of Prada-this and Prada-that: Prada Content, Prada Atlas, Prada Time, Prada Truth, Prada Code, Prada Vomit. Prada and Koolhaas must have giggled over their 'Prada Army' -- a pun on what is usually known as the store's 'service.' This is a group of very good-looking (and very white) boys and girls who are casually instructed to be 'desirable and luxurious' at all times while working. Many at the actual store just looked a little bored.

On page 9,587 (or something approximating that, there are no Prada Page Numbers) there is an image of the sadomasochistic wedding from Pasolini's Salo. The image appears several times in the book: once with the label 'Prada Truth,' again with the caption 'Aura' and finally simply as 'Prada.' The image is all over the store's flat-screen monitors too, so it's safe to assume that someone at Prada really likes it. Koolhaas tries to re-cast the murderous wedding image as an example of when the virtualization of fashion becomes 'perverse.' He leaves it at that and quickly moves on. It's probably the best instance in the book of a raw, unbaked idea that could have been a lot more engaging if Koolhaas had only tried a little harder. Perhaps Pasolini's meditation on fascism and consumer culture has some place here, but no one over at OMA/AMO seems up to the task of filling in the blanks.

The book also gives us a glimpse of what lies ahead in San Francisco and Los Angeles. Koolhaas and OMA/AMO are keen to the fact that shopping nowadays is much more than making a purchase, and much of the space in the 'epicenter' stores will be devoted to runway shows, film screenings and performances. What exactly will be done has yet to be seen, although it was reported that Miuccia Prada is interested in screening 'really independent' films at the New York store. Photos of small, crude models of what is called the 'Hanging City' show a space where much of the activity might take place. In the book at least, the vaguely delineated events seem well attended by lots of well-dressed people, represented by lots of little well-dressed plastic figurines. Whether or not Prince Street's Prada will simply default to hosting the occasional fashion show, or will grow into an 'epicenter' of cross-cultural events, is anybody's guess.

The store is, at first glance from the Broadway entrance, everything the drawings and models in the Prada publication showed us. There's the big wave, there's the large wall with the colorful wallpaper, and there are the little plastic Prada people. Following up on a trend which started with the Pasolini image in the OMA/AMO book, the Arno Brecker-like sculpture at the door puts a slightly fascistic spin on the whole affair. While I was visiting the store, very few people seemed to be actually interested in the clothes, and this of course may not conflict with OMA/AMO's intentions. The building, not the clothes, is the product to be sold to us non-customers. It did in fact seem to fascinate some, although I overheard as many groans of despair as I did cries of ecstasy. Many people were wowed by the gadgetry of the changing rooms. All were very surprised that the rumors have proven to be true: a slightly intelligent computer can find out what exactly your clothes are, and you can in fact see your behind live on a video projection in the mirror. Those who entered the changing rooms with me (without Prada clothes of course) found that it's a lot of work to actually get the thing working. It's not immediately intelligible which pedals open and close the doors and which fog the windows, and the label-reading gizmos don't come with clear instructions. After looking around for help, the Prada Army seemed to be AWOL. It's to be expected; after all, they are probably tired of showing non-customers to dressing rooms with no clothes in hand.

It's surprising that so little in the store seems outstandingly new, or to use a word favored by one critic, 'revolutionary.' The 'r' word pops up often in the parlance circulating around the new store, and aside from a few technical innovations involving customer tracking, and the previously mentioned changing rooms, evidence of truly innovative architectural or even commercial ideas is hard to find. If anything, Koolhaas has become a talented mimic, parroting every current and not-so-current architectural idea imaginable. After spending some time wandering around, it becomes clear that the architectural vocabulary of the store is downright hackneyed. Randomly sample a portion of the shop and your results will be something like this: one part Matta-Clark, one part Mies, and one part --or maybe two parts -- Barbarella. The entire project comes off as a tired exercise in what many others have done far better years ago. The large ramp is thoroughly Acconci, the wood paneling is suspiciously close to Diller and Scofidio's Brasserie, and the elevator is more than reminiscent of Graham's DIA pavilion. Or maybe that elevator is Hejduk's Cooper Union renovation. Or maybe the Wittgenstein house.

Right now there is only a New York 'epicenter' store, but rest assured, many more are on their way. That's what the book says, anyway. On its own terms, the design of the Prada store we do have is in a league apart from many of the other high-fashion stores in New York. The ambitions are clear, the investment equally ostensible, and although some praised it as a 'museum,' I would prefer to place it more solidly in the category of 'world-expo pavilion.' This is not to demean the quality, only the longevity. Koolhaas and Prada seem uninterested in their new store enjoying a gentle fade into rarefied obsolescence. How long will the technology of the changing rooms continue to impress? And how long will those wood paneled walls and floors last? They're already a little rough around the edges. Maybe it doesn't really matter -- especially if talk of Chapter 11 is not over-exaggerated.

While wandering through the Prada store I kept thinking of the more plebian Niketown, whose jock-strapped mind-set is in many ways anathema to the Prada crowd. It seems that Koolhaas and Prada have been thinking about it too. Somewhere in the book the architect muses: 'Prada can be big in small spaces. Nike can only be big in large spaces.' Or maybe it's the other way around. Prada's real estate envy aside, when the Niketown store opened, it was, and still is, a store like no other. With its elaborate pseudo-scientific explanations of bladder technologies, mind-boggling variations on shoe-display techniques, and centralized movie screen that purposefully distracts customers from their shopping with one-story tall Nike commercials, the store truly ushered in a new level of absurdly spectacular shopping. All this was not done naively on Nike's part; however the company never strove for Niketown to be a grab bag of appropriate architectural quotations. More importantly, the store was part of a touristic and commercial revision of New York which, for better or worse, truly transformed the landscape of 57th Street and Manhattan at large. Plebian, mass-produced, health-crazed, and sweat-covered, Nike revolutionized the space of shopping in a more effectively generalized way than the still-rarefied culture of Prada could ever do. Prada feels like a latecomer, not only to SoHo, but also to the globalization game in general. It is too self-conscious, too refined, and overly prepossessed with preserving its 'auratic' qualities in the eyes of its non-customers. The much-praised eroticism of the shop feels dated as well. It is more the stuff of '70s bathhouses and peepshows than the digitally mediated, post-Giuliani, health-conscious New York sexuality of the '90s. The oddity is that despite the fact that both Koolhaas and Prada came to their notoriety during the latter decade, their fantasies and ambitions still seem forever mired in the former.