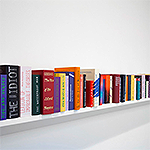 This library collects unwritten books, books existing only in their conception, a phantom literature larger and more varied than the written one we know. The library is infinite in size, its architecture as imaginary as the books it contains. Four shifts of librarians process the innumerable titles that arrive to the library every day. They classify a book, not by subject matter or geography, but by what prevented the book from existing. On the first floor of one building, for example, are accidents. On the second floor are suicides, followed by illnesses, wars, famines, etc. In an adjacent building are the books whose authors fell victim to life’s troubling generosity. These are books undone by distraction and satisfaction, books interrupted by children, careers, marriages, hedonism, and—most devastating of all—happiness. No matter what the classification, though, most of the books in this library were never written. They are permanently notional, always about to be started, the stuff of conversation and daydreams.

Until very recently, though, a special collection existed in a subbasement of the main building. These books were known as “crossovers”–unwritten books that have somehow appeared in written books. The crossovers included titles like Sexplosion, an unwritten book reviewed in Stanisław Lem’s A Perfect Vacuum, and The Lottery Man, an unwritten book mentioned in Roberto Bolaño’s 2666. It is not hard to see why these books were a cause for some controversy. As their designation suggests, the crossovers occupy the anxious contact point between the real and the imaginary. Unlike the rest of the collection, the crossovers originated in the author’s weakness for writing, and for this reason, many of the librarians debated the crossovers’ inclusion. The loudest group, the fanatical conceptualists, believed that any book that appeared in print should be excluded from the collection. Of course, this would have included those unwritten books whose titles have been published in novels. The more moderate librarians argued for the crossovers’ importance, often invoking the library’s patron saint: the American writer, Richard Brautigan. It was he, the moderates said, who helped found the library, and it was he, even more than Lem, who was most charmed by crossover books. If we were to throw out these crossovers, they pleaded, then what would we do with Brautigan’s The Culinary Dostoevski?

As was to be expected, the fanatics won. The crossovers were purged, and they are presented here as the casualties of a double censorship. Neither written nor unwritten, these uncommitted works are unwelcome in every library, the excluded middle of literary ambivalence.