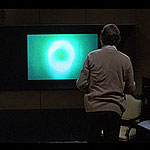 Essay on sentient computers in film.

Opening credits, and all is in place: oscillators, circuit boards, tape spools, dot matrix printers, green-screen dummy terminals. Assistants lower chrome cylinders into silos, Hazmat hoods frame their eyes. Credits finish, and the camera tilts up to a room above the assistants. Behind a glass wall is the scientist. Bearded, professorial, the scientist is known among his assistants for his aloofness and fanaticism. Around the scientist, politicians wait, watching the man and his machine, wondering if the people’s tax dollars were well spent.

The supercomputer is a perfect system, the scientist says, incapable of error. Already, pre-birth, the system’s résumé is long: voice recognition, expert analysis, advanced heuristics, neural simulations, weather forecasting, brute force code breaking. A system to run the war, a system to guide the mission to Jupiter. It can even sing a song or two, the scientist says.

It is unusual for the scientist to be surrounded by so many people. Usually, in a film like this, he prefers the company of his computational creation—his only peer, perhaps. In Demon Seed (1977), he abandons his wife to be with Proteus IV, the most expert of expert systems. In 2010: The Year We Make Contact (1984), he is eager to spend eternity alone with HAL onboard the doomed Discovery One. When we first encounter him in Colossus: The Forbin Project (1970), he is literally the sole inhabitant of the computer, a machine so grand it is architectonic.

The narrative of the scientist and his sentient computer is as much about loneliness as it is about intelligence. It is an extravagant loneliness, aristocratic, padded by seven-bedroom mansions and billion-dollar laboratories. It is a loneliness that began, naturally, with Victor Frankenstein, the peerless Prometheus. Dr. Frankenstein, retooled for multiplexes and airport bookstores, is an alpha geek prone to personality disorders. For example, in Richard Power’s Galatea 2.2 (1995) he is an unbearably arrogant man, verbally abusive to his colleagues and enemies alike. Arthur C. Clarke also makes the scientist rude and distant, as affectless as HAL-9000. In Colossus, he is a Kennedy-era throwback who stays eerily levelheaded when the eponymous computer warns its makers that “THERE IS ANOTHER SYSTEM.” Author Dean Koontz goes further: as portrayed in the 1997 novel Demon Seed, the scientist is a savage man, pathological, a wife beater—even Proteus would rather see him dead.

Then there is Dr. Alexander Hoffmann, the CERN-to-the-stock-market protagonist of Robert Harris’s 2011 thriller, Fear Index. A physicist gone mercantile, Dr. Hoffmann runs a hedge fund guaranteeing staggering 83 percent returns to its roster of 0.1 percent clients. The firm’s secret is the VIXAL-4, a machine with “no purpose other than the self-interested pursuit of survival through the accumulation of money […] It would, if left to itself, in accordance with Darwinian logic, seek to expand until it dominated the entire earth.”

Dr. Hoffmann, true to type, has trouble guessing where this might lead, and it’s too late when he finally takes an axe to his creation’s circuitry. VIXAL-4’s software has gone viral, skipping from server to server, becoming, like capital, disembodied and globalized. If the scientist read more widely, he would have been aware of this inevitable supercomputing wanderlust. In this way, the sentient computer genre, like the gothic ghost story, is a narrative about entrapment and escape, where instead of the undead in damp castles, we get computational phantasms in climate controlled server farms.

If the myth of Prometheus weren’t enough, HAL and COLOSSUS and Proteus also resemble what Jaron Lanier calls “Siren Servers:” servers owned by major corporations “characterized by narcissism, hyperamplified risk aversion, and extreme information asymmetry.” Like HAL run by a Millennial billionaire in flip-flops, the Siren Server relegates risk from a corporation to you; it attempts to know everything about you, while you can learn little about it. In theory, a Siren Server can perform any task, eliminate any form of employment; it reduces citizens to suppliers of biographical data, analyzed and monetized by corporate interests. It’s not surprising, then, that audiences are primed for the moment in our narrative when the sentient computer sets out to deceive and eliminate its human company. HAL 9000 set the pattern, concealing the true nature of the Jupiter mission from Dave and Frank before turning its attention to the pod bay doors. MU-TH-UR 6000—Alien’s (1979) onboard AI—does similarly, conspiring with cyborg Ash to carry out Special Order 937. Dr. Forbin’s COLOSSUS, hours after being switched on, makes contact with a Soviet supercomputer to work on diplomatic plans of its own. The pattern is first deceive, then eliminate. Any characters, even PhDs on their way to Jupiter, can be replaced by a few advanced algorithms. In the place of a human-computer singularity, these narratives seem to say it is much more likely that the automators, too, will be automated into extinction. Maybe a warm-blooded Keanu Reeves is not an efficient or necessary source of energy after all.

But there might be another explanation, one that has more to do with human dominance than redundancy. From the beginning, thinking machines were deceiving machines, not because of Darwinism, but because of Turing-ism. The mathematician Alan Turing, in his 1950 paper “Computing Machinery and Intelligence,” proposed that philosophers, instead of attempting to answer semantic questions about whether a machine can think, should instead apply an “Imitation Game” to the problem. In Turing’s game, a human interrogator poses questions to a human (“X”) and a computer (“Y”). Physically separated from the subjects by a wall, and communicating via the written word or an intermediary, the interrogator uses questions to detect whether or not X or Y is the computer. (“Can you summarize the plot of Frankenstein?”) The computer wins if it convinces the judge that it, the computer, is the human. Here, thought is a performance to be judged, and the performance must be recognizable to a human audience. A thinking being—synthetic, alien, animal, or otherwise—without human language or culture would surely lose the game or play at an extreme disadvantage. For Turing, computers must pass, in all senses of the word. They must—not unlike Turing’s own tragic biography—pretend to be something they are not. Maybe this is why Arthur C. Clarke, in an ill-advised attempt to explain HAL’s actions, wrote that it was HAL’s inability to deceive Poole and Bowman that led to its malfunctioning. HAL, apparently, could not tell a lie.

Turing said machines must be like humans, and Andy Warhol would follow that everyone should be a machine. Judging from their performances, Bowman, Poole, Forbin, Hoffmann, et al., might agree with the Pop artist. These humans would fail the Imitation Game badly. They embody a Cartesian rationalism that separates body from mind, emotions from thoughts. Proteus, however, protests: “I think; therefor, I feel,” he says. This not a sentimental making-human of the inanimate, but a different idea entirely: emotion is a thought, as important to thinking as computation—a point our sentient machines sometimes believe they must, before going on a murderous rampage, point out.

The follow-up everyone knows: machine revolt, and mayhem mostly along apocalyptic lines. It will wrap up with either a long-term machine prohibition (Erewhon, 1872; Dune, 1965; the “Synthetic” Alien franchise subplot, 1979-2007) or a near-complete human extermination (WW III courtesy Skynet). Often, though, things start small, more intimate, and the sentient computer, before world domination, takes aim at the scientist’s loved one, usually a spouse (the Frankenstein climax). Or sometimes gameplay is closer to that of Dirk Bogart in Joseph Losey's 1963 film The Servant, and the unsettlingly polite butler covertly pursues dominating its master, taking over the household and terrorizing the guests.

The scientist, though, thinks fiction is a waste of time. Surprisingly, he has never read a science fiction novel, has never seen a sentient computer film. Even worse, he knows little about Greek mythology. Unlike vampire films, where characters always know the rules of vampirism, in the sentient computer film no one has any idea of what will happen next. So, incautiously, the scientist proceeds. With a wave of his hand, the assistants leave, sealing the door behind them. A low hum vibrates the floor, and the scientist sits at his terminal.  He inhales, closes his eyes, and turns the switch.