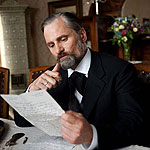 Sigmund Freud as a character in the movies.

Sigmund Freud is in the movies. He is on television. He is in romantic comedies, period dramas, experimental documentaries and science-fiction films. In some of these productions, Sigmund Freud is at the center of every scene. In others, Sigmund Freud is only a walk-on, not even a speaking part. Characters gather around him, ask him questions. They call him ‘Sigi’ and ‘Sigismund’ and ‘Herr Professor’. Sigmund Freud responds by saying what he wrote in letters and published in academic journals. To a roomful of aliens he says, ‘Dreams are the royal road to the unconscious.’ To an animated puppy he whispers, ‘Anatomy is destiny.’ Often he acts as you might expect Sigmund Freud to act: like a Victorian man of good manners with penetrating – though dangerous – opinions. At other times, Sigmund Freud is not Sigmund Freud, not the flesh and blood man, but the idea of Sigmund Freud, a body-double flanked by quotation marks.

Following Sigmund Freud’s death from cancer and the death of psychoanalysis to pharmacology, movies embrace him and he returns the gesture. After 1958 he makes more than 50 appearances on big and small screens. Set free from science, the ghost of Sigmund Freud walks Hollywood soundstages. In Lovesick (1983), for example, he appears as a vision to a distraught psychoanalyst played by Dudley Moore. In an episode of Bewitched, a spell conjures him to psychoanalyze a witch’s marriage. In the Star Trek: The Next Generation episode ‘Phantasms’ (1993), his ghost is a hologram on the starship enterprise, analyzing the dreams of the cyborg Data.

Sigmund Freud does not believe in ghosts. In psychoanalysis he listens for them, hunts them, dispels them. It is not hard to see this process as a kind of exorcism. Perhaps that is why when a young Indiana Jones seeks Sigmund Freud’s advice in The Adventures of Young Indiana Jones (2007), he resembles Max von Sydow. The former exorcist, Father Lankester Merrin, is the perfect analogy for the psychoanalyst, which, of course, would make Linda Blair analogous to Bertha Pappenheim. To look like Von Sydow is a daring move on the part of Sigmund Freud: he must change himself completely. Max von Sydow is not the right height or complexion; he is more convincing as a Nazi.

Like many celebrities, Sigmund Freud is an addict. His drugs of choice are nicotine and cocaine. He prefers the former drug as a cigar, the latter mixed in water. The psychoanalyst experiments with cocaine, both medically and recreationally, during the 1880s and 1890s, but he smokes his entire life, even as cancer consumes his palate and jaw. While almost all productions show the smoking, almost none show the cocaine. The exception is the BBC miniseries, which includes a coke party Sigmund Freud throws for the Viennese medical community. The 1984 miniseries shows much cocaine use – a fact one might attribute to the decade, perhaps.

The series’ fascination with the drug is matched only by that of The Seven Percent Solution (1976), in which the cocaine user is not Sigmund Freud, but Sherlock Holmes. In the movie, set in 1891, Dr. Watson tricks the great detective into going to Vienna after drug abuse drives Holmes to psychosis. This is not just therapy – it is also matchmaking. To no one’s surprise, Sigmund Freud and Holmes discover they have much in common. (The historian Carlo Ginzburg makes this affinity clear in his essay, ‘Morelli, Freud and Sherlock Holmes: Clues and Scientific Method’.) The detective and the analyst form a buddy-movie pair, pushing poor Watson aside – Sigmund Freud investigates criminal minds, while Holmes investigates criminal trails. For both men, no detail is too insignificant. They train each other, analyze each other. First Holmes deduces Sigmund Freud’s history from glancing at the doctor’s office, then Sigmund Freud submits Holmes to hypnotism. When Sigmund Freud snaps his fingers, ending the hypnotic session, Holmes will remember nothing.

As an analyst, Sigmund Freud abandons hypnosis in the 1890s, later calling the practice ‘a senseless and worthless proceeding’. But many of his film roles include a pendulating pocket watch. Sigmund Freud knows this is wrong, and he says nothing. In his trailer he thinks that, for the movies, hypnotism is a jump-cut past years of analytic work. He suspects the movies love hypnotism because, in hypnotism, movies see their double. If movies are like dreams, they are also like the hypnotic session: tinged with black magic and prone to treacherous suggestion.

With or without hypnosis, Sigmund Freud continues to see patients. He sees Holmes and Data, Gustav Mahler, the Wolf Man and Anna Freud. And there is the lesser-known Marilyn Cuberle, a dowdy young woman who refuses to have an operation to become beautiful. As shown in the 1964 Twilight Zone episode, ‘Number 12 Looks Just Like You’, everyone in the future has this operation. The young woman’s friends and family explain the operation will make her permanently happy and permanently beautiful. Refusing the operation is an obvious sign of neurosis, perhaps melancholy, so therefore Cuberle must see a shrink. Here, Sigmund Freud is played out of character, and to protect his leading man reputation, the analyst’s name is changed to ‘Sigmund Friend’. We know what the fig leaf is hiding. When Cuberle asks, ‘Why does everyone want to force me to do something I don’t want to do?’ Sigmund Friend laughs darkly.

The role was difficult for Sigmund Freud. He usually does not play a representative of the status quo. He prefers to play the rebel, the intellectual and emotional outlaw. On screen, he is a man of exploding emotions. His rages shake the antiquities. In this way, John Huston’s Freud: The Secret Passion (1962), Sigmund Freud’s first starring role, typecasts him for decades to come. Beneath his calm surface works a pain worthy of Montgomery Clift. As a graduate of the Actor’s Studio, he uses the method to excavate the psyche and fearlessly present his findings. In Huston’s film, the method and psychoanalysis meet. Through every scene Sigmund Freud searches for a sense memory, for that buried ordeal that will bring a tremor to his eyes.

Privately, among his friends, the psychoanalyst threatens retirement. The movies no longer interest him, he says. Later this year he will appear in A Dangerous Method, a movie directed by David Cronenberg – yet another historically accurate drama – and then no more. The trades report a directorial project, perhaps a life of Moses. Poolside, Sigmund Freud wishes for a second death. Anything to free him from the airless repetition of costume drama. Perhaps they will kill him, he thinks, with fame or a Lifetime Achievement Award. Or perhaps he will continue in cinematic purgatory, an unrecognized journeyman, an exile in his own country.