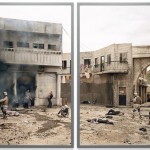 She said she came here when the noise became too much and she would walk from room to room and look at whatever they had to offer.

She pointed to her ears when she said this.

“It’s like tinnitus?” I asked, avoiding an oncoming pedestrian.

She stopped mid-sentence. She did that often. Let sentences stop.

“I have a problem with the higher decibel range. City sounds are sometimes painful.”

We crossed the street talking about a CD she listened to with everyday sounds. She said the sounds were called “pink noise.” She said pink noise helped. I didn’t know what pink noise was.

“How do you get this, this condition?”

“An accident. Falling. Getting slapped.”

I decided to speak softly.

She gestured to our destination: a gallery down the block. I thought about pink noise. I pictured what pink noise sounds like. Nothing came to mind. I thought of color-coded albums, a pink album in the pink aisle of the local record store right next to the red aisle and down a few rows from the orange and yellow aisles.

“Many people have what I have. Musicians. Construction workers. Explosives experts.”

When I was in school I read about something called synesthesia. Pink noise sounded similar. The teacher said people with synesthesia see a sound as a color and color as a sound. We studied a case where a man fell from a moving train off a bridge into the water below and survived. Afterwards, he had synesthesia. Beethoven had synesthesia too, I think.

“It’s hard to describe. It sounds like a brook or a lot of traffic at a distance,” she said. “Like all of this.”

Her hand wrapped the air.

She narrowed her eyelids.

The shutting door muted the street sounds behind us. A list of the galleries in the building hung on the opposite wall. It was too high up on the wall to read. I squinted.

“Which gallery?” I asked.

“Any one,” she said. “I usually start at the top floor and work my way down.”

We turned to the elevator. I didn’t move the conversation forward. I thought silence would be good for her, therapeutic.

The elevator arrived with a mustached operator and a tiny one-dollar radio playing a sports talk show.

“Top floor,” she smiled at the operator.

The three of us ground upward listening to a debate about steroids in sports.

“But if you’re sensitive to pink noise, then why listen to a CD of it?”

“Because I can control the volume on my own. I start it low and then I turn it up. Slowly. And when it gets too loud I hold it and I see how long I can take it.”

The elevator arrived to the top floor and the operator aligned the cab with the landing.

We exited and looked around at gray hallways in every direction.

We approached an empty gallery with a gray concrete floor and glass doors. I opened the door for her. I never feel comfortable doing this for women.

The gallery was like all of the rest I had seen that day: a large bank of windows overlooking an industrial horizon, poured concrete floors, white walls with things that look like contemporary art. Low-resolution videos, a childish painting, a pornographic portrait. No one at the front desk.

We scanned the room and she walked off without telling me to follow. She and I walked towards a room that was bigger than my apartment. We walked past two sculptures of identical, rotting wedding cakes. I wondered if she was married.

In the left panel, a group of Iraqis looked at the aftermath of a suicide bombing. In the center, divided by the white wall between the two panels, was the rubble of the attack. In the right panel a group of Occupation soldiers, Americans, arrived pointing guns. One soldier aimed at the viewer.

She immediately got a closer look at the bodies spread across black and red ground. Her face was inches from the gap between the photographs.

I asked myself why someone would want to make this.

“No, not a set. Not exactly. What do they call them? What’s the word?”

She looked at her feet.

I stepped back to take in the two panels at once.

“Must have been expensive,” I said.

“What was? The cost of the photo you mean?”

The gallery assistant returned to the front desk.

“No. The picture. To make it. Look at the detail. Even the uniforms seem right,” I said.

“Someone once said that the problem with Apocalypse Now was that it didn’t cost enough,” she said without looking at me. “This person said that the Vietnam War cost more per day than the movie spent in total.”

I asked myself how much the Vietnam War cost. I didn’t know. Probably, neither did she.

“I like this photograph and I’m not sure why,” she said. “It reminds me of the old masters. Your eye can make the scene. It’s almost impossible to see it all at once. You have to allow your eye to walk through it.”

I thought of a picture I saw on the front page of the Times Web site a few weeks ago. It was of the aftermath of a suicide bombing. I think it was Pakistan. It showed the remains of bodies, several of them. A bloody torso with an arm and head attached. Nothing else. I was shocked by the image, but not by what the image depicted. I was shocked by the context. In the context of the front page of the sanitized New York Times, the image had power. Anywhere else it would have less. Within a few hours the editors replaced the image with a less bloody one, an image you would expect to see on the front page, one that only hinted at the carnage hidden beneath.

She was talking. I hadn’t been listening.

“When you get into an accident, a bad one, this is how things are,” she said. “Everything is separate. You become part of something and apart from it at the same time. Like a daydream. You are part of it, and.”

She stopped the sentence prematurely again.

“It’s very quiet here,” she said and walked into the next room.