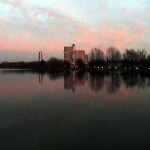 Any Persons, Living or Dead

Short essay on cinema and cities.

Several years ago, after exiting the subway in Long Island City, I was confronted with the aftermath of a car accident. Near to where I was standing, an ambulance was diagonally parked in the middle of an intersection. Two cars lay in a crumpled contortion on a nearby traffic island. One of the cars appeared to be charred by a fire -- the accident must have claimed the lives of the passengers. The death image of the burnt-out vehicles followed me several blocks.

It didn't strike me as odd that the scene was unpopulated. The ambulance's lights were turned off, the fires had been extinguished, and several pigeons sat perched on top of the wreckage. The intersection was quiet, calm, odorless.

Later, on my way back to the same subway entrance, I found the previously empty scene occupied by a film crew. Extras stood on the sidewalk playing shocked pedestrians, and actors lay among twisted wreckage posing as half-burnt motorists. A director barked orders. My pace sped-up in order not to be in the way. Two members of the film crew told me to stop as the director yelled "Action!"

Individually, the scenes are not unusual -- film crews are often found in the city, accidents also aren't uncommon. However, on the day of the accident, the two realities lived on the same site, conflated and confused, producing a rarer sensation, one less smooth, less distinct, harder to account for.

More than any other medium, cinema has worked to propagate this instability. Within a city, car crashes, muggings, bombings, political rallies are created and recreated in the very places where they might occur in real life. And when these events do actually take place, they are confused with their cinematic anticipations, they can't seem to live on their own.

"I can't believe it happened. It was like a movie."

Every city is a potential cinematic location. Like the economy of the international film market, the city becomes globalized, generic, inflated. But this phenomena is not simply a question of the image, of reproduction and simulation -- it is a process which effects how the inhabitants of a city live, where they circulate, how their money is spent, in what ways they work or occupy free time. Cinema does not eradicate or replace a site, but is intimately caught up in the everyday occupation of it. The life of a city is reworked according to the film industry's own oneiric logic.

You are seen on television walking through the background of a newscast. The police precinct down the block is used for the establishing shots of a television show. You remember to call a friend because the tail of an enraged ten-story-tall lizard destroys his neighborhood.

There, "North by Northwest" was shot. There, "The Siege".

The accident in Queens could have been many things. It could have been a crime film, or the key tragic moment of a tear-jerker about a family torn apart by a random misfortune. This was not Cronenberg's "Crash", or Godard's "Weekend" -- this was literal, the real thing, the stuff of television primetime drama. In the background was the gray face of an intersection in Queens, behind that, the skyline of mid-town Manhattan.

The director yelled cut. I continued walking towards the subway and the two burnt bodies opened their eyes.