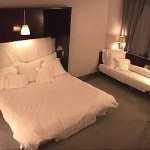 Midway through Godard's Contempt, a weary Fritz Lang quotes to a wearier Michel Piccoli a few lines by Brecht:

Each morning, to earn my bread
I go to the market where lies are sold
And, hopefully,
I get in line with the other sellers.</blockquote>
Brecht wrote the poem, Hollywood, while he was half-heartedly whoring through 1940s Tinseltown. Unlike his friend Lang, he failed to make a career in the industry. As for Godard, Contempt is the closest he got to the American films he once admired, although aside from the American producer Joseph Levine and his femme fatale Brigit Bardot, the film does not quite qualify as studio fare. Even so, Godard had his misgivings -- hence the quote, and a film drenched in allusions to whoredom and bad faith. Before begrudgingly adding the required Bardot T&A, the desperate director threatened to take his name off what was probably his best film. So, when Bardot asks, "What is it?" to Lang's recital, it's icily clear what he means by "A ballad by poor BB."

One wonders if Andrea Fraser thought of Brecht's poem and the poor Bardot-Brecht while "performing" her new video, Untitled (2003). Like the Godard film, the video at Friedrich Petzel Gallery is, ostensibly, about prostitution and art. Perhaps "about" is the wrong word. Fraser has been trying to blend the line usually dividing a performer from the act performed. Method acting in the extreme, she does not play the role of a prostitute -- she gets her hands dirty, so to speak, and works as one.

After a career of criticizing money and power in the arts, Fraser recently decided that she would rent her body to an art collector for a night of sex. Fraser's (perhaps) lucky collector remains anonymous. The amount he paid is not. According to the New York Times Magazine, Fraser's collector paid nearly $20,000 for the night's work. There were two other major requirements: the collector would have to be interested in having sex with women, and be unmarried. Given the second requirement, the artist missed the seamiest side of prostitution. One understands wanting to avoid a scene. Even so, Fraser still has quite a scene on her hands.

Shot from a stationary camera placed near the ceiling of a hotel room (supposedly the Royalton), one sees the corny seduction of the collector, some foreplay, heavy petting, then a long stretch of not so graphic sex culminating in the obligatory post-coital cuddling. Our view of Fraser's trick is Skinner-like, sixty minutes of quasi-omniscient voyeurism. There are some porno elements: bad acting, a chic hotel room, a thong and heels. The video is devoid of the true staples of the genre though: no waves of bodily fluids, no totemic members, not even a wailing soundtrack. In fact there is no soundtrack at all. Without sound or montage, Untitled avoids any deep engagement with cinema, and considering its remoteness from the sex, it is evidently not that interested in pornography. After a few minutes, one begins wondering what exactly Fraser is interested in.

It may be best to put aside the obvious prostitution topic for a moment. In an essay on her work, John Miller quotes Fraser as wanting to move away from "institutional critique" toward work that is "more focused on artists than institutions." Untitled fits that bill to some degree. In the video, the critique of artists (who? all of them?) is naturally attenuated, one-dimensional. This is not entirely bad. Somewhat appealingly, and unintentionally, criticism steps back for a moment, and other more interesting subjects come into view: risk and infamy.

There has been some talk of how dangerous the work could be for a collector. This depends on the collector. Obviously there are many people who would not worry about participating in pornography (or near-pornography). If Fraser had looked, she could have found. No, when worry is expressed about the collector, it is misplaced. The real 'fear' is for the artist. If there is a risk, it is one of social stigma, of an artist making a bad move, a weak piece, a work that is more infamous than it is interesting.

Despite the secular righteousness Fraser might win through transgression, the sex is depicted graphically enough to turn off a fair number of simpler moralists. Shameless self-promotion, using sex to make a quick sell, cynical, unthinking, self-destructive -- the sermons are circulating around. Like her recent works, Art Must Hang and Official Welcome (both 2001), transgression itself is put under scrutiny. The artist as an I-don't-give-a-damn bad boy (or girl) is what becomes questionable. It is not that Fraser finds this kind of position unacceptable or immature. Instead, it is the market that makes transgression questionable, negates it, reduces it to another brand name. Whether it is with sex or personal trauma, a bad attitude sells.

Which is also true for Fraser. A perennial criticizer of the works of others (seemingly the entire art world at times) Fraser has built some Hoover Dam-sized blinders to her own faults. In a recent interview in Documents, Fraser explains that Untitled partially came out of the tough time she had deciding whether to accept a career in the commercial gallery context. To sell or not to sell? Somehow Fraser's usual irony failed her and the pettiness of the dilemma went "un-critiqued." In the relative calm of the (now) halcyon 1990s, her quandary might seem relevant. Today, it is unintentionally comical.

Fraser's work has become increasingly prepossessed with the self-reflexive. She has erecting a hall of mirrors around her own practice. Never satisfied with simply making a political statement about culture, she must fracture her voice, sending it in several contradictory directions at once. Often this means cribbing the spoken and written statements of others in order to cast doubt on their positions. The technique itself was cribbed from Pierre Bourdieu, who, thankfully, never allowed his work to devolve into the self-indulgent. Most of Fraser's critiques of artists and critics and administrators and patrons have lately amounted to little more than reading their lines with too much affect. It's funny, for a moment. Then one realizes that one is learning next to nothing about, well, whatever she is trying to get at.

It was not always so. Fraser built one of the most important bodies of political art of her generation. She did this by expanding her subject matter beyond the walls of the institution. She exposed InSITE97 for the mendacious corporate and civic lubricant it dangerously resembled. She showed how the origins of the American museum had as much to do classism and racism as it did with solemn aesthetic contemplation. The work was deeply informed and researched. It was brilliantly written and wittily performed. It did not moralize. It spit acid.

By exposing, and showing herself exposing, Fraser was following the path of Brecht. Lately, she has taken this line a little too literally. Exposure became exposure for its own sake, or at least for the artist's sake. These days, we hear from Fraser how obnoxious artists can be. We get imitations of Vanessa Beecroft and her work, easy targets surely. Criticism has become griping. In deep distinction with Brecht, Fraser has failed to speak about more than her own predicament. Brecht left Hollywood. He continued to confront fascism and write the most important political plays of the twentieth century. In short, he got over it. Let's hope Fraser does as well, and gets back to doing the work that made her important in the first place.