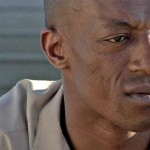 An Interview with Yvane Chapuis

Interview conducted with me about my short film "Occupation."

English translation of an interview with Yvane Chapuis

John Menick: When you first invited me to do the project, Aubervilliers was new to me, and since the work I did had to relate to the city in some sense, I was hesitant to bring too many preconceived ideas to the site. On the other hand, there's more to a project than it's supposed subject. Occupation involves many of the themes that are emerging in my work, such as ruined cities, urban isolation, and the mediation of our environment through cinema. That all came out later -- I only realized then how much this project had to do with a lot of my already formed interests. But early on, as you probably remember, I wavered between creating an essay video and making a narrative project, and quickly went through a lot of project ideas.

The writing of the film script has gone through several phases. Your first contact with Aubervilliers came about through Lotar’s film, which seems to have been a determining factor in your project. You first imagined that your film would be a parallel of this documentary from the forties and would take the form of a documentary set in the future where you would use the possibilities of science fiction to discuss the present political and cultural situation of this city. Then you visited the site in order to scout locations and see the city's daily life. During this time, we met several administrators and activists in the city (urbanism and housing officials, DAL, etc.) who informed you about Aubervilliers' political history, social housing policies, and urban development projects. You were especially sensitive to an event from 2000 concerning a squat by immigrant families within a social housing complex, their eviction, and DAL’s support of the families. You thought for a while that this event would constitute the subject of your film.

The first direction, like the second, was marked by the desire to open up a perspective onto the Israeli-Palestinian conflict. This project involved Clamart, and a more self-reflexive idea of foreign documentarians coming to Aubervilliers to make a film about the city. Could you describe how this script related to your own original interests and politics in the Middle East?

Yes, One of the more developed early project ideas concerned two filmmakers taking a trip around Paris to the suburb of Clamart. The filmmakers are both foreigners in France, and they are taking a break from the documentary project they are shooting in Aubervilliers about a housing occupation. The supposed purpose of their trip to Clamart is to shoot some footage at the hospital where Yasser Arafat was dying (the film was set in 2004), but really it was about the drive in between the two suburbs, which is about 45 minutes in length from door to door. Their documentary within the film is fraught with difficulties, and among other topics they discuss their film and Aubervilliers.

The problem with that script was that it just kept growing, and started to approach feature film length, and we didn't have the budget or time for that. Plus, as it went on, the screenplay had less and less to do with Aubervilliers, at least in any direct sense. In fact, the characters were literally escaping from Aubervilliers, and although they did a lot of talking about the suburb, I thought it was a little bit of a copout to never see it. I liked the premise for the film very much, and hope to shoot it in some form, but at the time I had to take a step back and reconsider my approach. The way out was a character I introduced about halfway into the story when the filmmakers pick up a Senegalese postcard salesman named Malik who is hitchhiking through the suburbs of Paris. While writing that scene, I started to become interested in the hitchhiker more than them, and after I while I thought, "This guy needs his own film." So he's kind of a spin-off from a film that was never made.

I wanted the politics to be in the background, in a literal sense by being on the radio, and in the oblique references within Malik's own work to the house projects of Aubervilliers. A title like Occupation tied Malik's singular experience to these politics. The film has many kinds of occupations: the RFI reports on Afghanistan and the Paris housing occupations, Malik's own peculiar occupation (meaning, "job"), and his mental preoccupation with the city. I hoped to suggest that he has a circular existence, a siege mentality. These are the only things he does: wander Aubervilliers, produce these images, and observe the transformation of his city.

We can observe a whole variety of iconographic references in the film, each of which carries a specific meaning. Postcards refer generally to ideal sites; some of your images as well as the RFI radio programs add a documentary dimension to the film; other images are really cinematographic, others are really pictorial; still others refer to television series… There are also the archive/historical images from Eli Lotar’s film. Is this option of using different kinds of images and the dialogue that you build between them linked to the fact that you are a foreigner and that you have no access to the French language?

Well, everything in Malik’s space is mediated, whether it is through his postcards, or the Lotar film, or the reflection of the windshield of the car. I wanted to give only a fragmented view of Aubervilliers, but one that was also very zoomed in, very focused on one piece of daily experience. I never wanted to pull back and say, “This is Aubervilliers.” In the film, you don’t see much documentary street life, no typical images of bustling streets and crowded cafes. In a sense, that is the biggest difference in approach between this project and Lotar's film.

I wanted this character to be on the margins, and for our own point of view to be placed there. Part of this approach came from me being on the outside of France myself. Although I try to keep up with French politics, film, and literature, I can’t speak the language, so I have to survive through translation and interpretation, and hence, my interest in mediation. I could only honestly make the project from the point of view of a foreigner, one who is always going to be, on some level, locked out of the culture, albeit not in the extreme way that Malik is. The original script was written from the point of view of two filmmakers more or less like myself, and that seemed to be a little too easy, as if I didn’t believe that fiction could transcend one’s very particular background. Simultaneously, I’ve always loved literature and films that follows someone who doesn’t have full access to his or her environment, such as the experience of a tourist or child or marginal. (I’m thinking, for example, of the Japanese couple in Jarmusch’s Mystery Train.)

There is also, obviously, a lot in Malik’s experience which is not my own. Even though it's not entirely clear in the video, in the script he is from Senegal, is an immigrant, and is possibly without papers. His economic level is low, and he has little chance of upward mobility. Again, I didn’t want a documentary. I wasn’t trying for realism. If I were, I would have never had him living in a car, which, for someone in his position would be unaffordable, especially in Europe. In fact, homeless living in cars is a very American thing. Until very recently, gas was relatively cheap in the US, and there exists a sizeable gray area of poverty here involving people who neither have a house nor live on the street, but can spend many months and years living out of their cars. It's a kind of road movie, albeit one made on a cul-de-sac.

At the same time, Malik seems to be very much in tune with his environment. On one level he is obscure: what exactly he has to say about Aubervilliers is never revealed. On the other hand he seems to see something in the city no one else is willing to see.

If the city and its transformations constitute the central theme of your films, "The Disappearance" and Occupation differ considerably from a formal point of view. The first is indeed realized using still images recycled from the Internet, whereas your new video is almost completely shot from a screenplay. If at the origin of the project "Occupation," like "The Disappearance," you wished to let a voice-over be in charge a considerable part of the narration, you progressively oriented yourself towards a more conventional treatment of the fiction with the creation of characters and the writing of dialogue. For you, does the realization of Occupation correspond to a desire for cinematographic experimentation and does it open directions that you wish to extend? Or, is the form for each film specific?

Possibly both approaches fall within “conventions” so to speak, and I actually think of Occupation as the video that is less conventional, even though "The Disappearance" belongs to a tradition that is slightly more obscure: namely, the essay film. I don’t know if there are enough essay films to make any kind of formal rulebook, in fact the essay film almost is a kind of negative theology in relation to documentaries, in that they are everything documentaries are not. However, "The Disappearance" definitely did come out of repeated viewing of films like "F for Fake" (Welles), "San Soleil" (Marker) and "Looking for Locations in Palestine" (Pasolini), so I guess there is some sort of cinematic tradition there.

I was on a steady diet of Tsai Ming Liang, Bela Tarr and Gus van Sant before I made Occupation, so I was thinking a lot about very distended and dissolved narratives. I very much like how for these three directors cinema is as much abut duration and time as anything else. Their films represented, for me, a complete revision of narrative cinema since Griffith. I also found their films refreshing in how silent they were. Part of my deciding to do a narrative short came about as a challenge to myself: I had wanted to write something without any voice-over, to tell a story only through images and sounds. In fact, as you might remember, the first draft of the script didn’t have any dialogue at all. It was completely “silent.” I think I overshot my goals, and ended up pulling back and making my approach less extreme while shooting, but Occupation was a simultaneous reaction to both the voice-over heavy approach of "The Disappearance" and post-Griffith narrative filmmaking.

But to answer your question more specifically, yes, it's a form of experimentation for me. Each project has its own forms. I like to start over and over again from scratch when it comes to cinematographic form, and I think that all kinds of cinema have something to offer. I'm not interested in doing the same thing for too long, or developing any sort of prefab style. I always try to stay open to whatever happens next.